Imagine… These can only be once in a lifetime experience!! And this has been beyond exhilarating !!
The plan was on to reach Ulaanbaatar to meet the team from the Indian Embassy, who have been fabulously coordinating and monitoring our movement since we started the Odyssey.

Ulaanbaatar, formerly anglicised as Ulan Bator /ˌuːlɑːn ˈbɑːtər/ (Mongolian: Улаанбаатар, [ʊɮɑːm.bɑːtʰɑ̆r], literally “Red Hero”), is the capital and largest city of Mongolia. The city is not part of any aimag (province), and its population as of 2014 was over 1.3 million, almost half of the country’s population.[1] The municipality is in north central Mongolia at an elevation of about 1,300 meters (4,300 ft) in a valley on the Tuul River. It is the country’s cultural, industrial and financial heart, the centre of Mongolia’s road network and connected by rail to both the Trans-Siberian Railway in Russia and the Chinese railway system.[3]

Despite most of the temples being destroyed by the Soviets in the 1930, the city still retains a good number of monasteries, temples and palaces.

The city was founded in 1639 as a nomadic Buddhist monastic centre. It settled permanently at its present location, the junction of the Tuul and Selbe rivers, in 1778. Before then, it changed location 28 times, each new location being chosen ceremonially. In the twentieth century, Ulaanbaatar grew into a major manufacturing center.[3] Ulaanbaatar is a member of the Asian Network of Major Cities 21. The city’s official website lists Moscow, Hohhot, Seoul, Sapporo and Denver as sister cities.

Ulaan Bataar is a city that is a mixture of the East and the West: Western-style restaurants next to traditional restaurants selling dumplings and soups; people wearing jeans and teeshirts walking beside people wearing the classic deel; taxi drivers listening music made on the morin khuur discussing American soap operas that they watch on TV…

Because tourism as an industry hasnt picked up yet, it can be challenging to travel around.

The meeting point was ~60 kms away from the city of Ulaanbaatar, the Mongolian Choppers of Ulaanbaatar biking club were to escort us to the Indian Embassy, which was again fantastically coordinated by the Indian Ambassador HE Dr T Suresh Babu and Second Secretary Mr. Mohapatra. The wait on the highway, led by Mr Mohapatra, was close to 2 plus hours before we reached… Then started the dream experience into the city to reach the Embassy.

A police car with wailing siren leading the team led by bikers of the Mongolian Choppers of Ulaanbaatar and Mr Mohapatra and his team in the Embassy car..
Imagine.. Every traffic junction was stopped to let our convoy pass till we reached the Indian Embassy to a warm welcome by the Indian Ambassador himself!!
We enjoyed the hospitality of the Indian Embassy, a personal follow up of our wellbeing by the Minister of External Affairs, (now Late L ) Mrs Sushma Swaraj Ji herself.. Need we ask anything more.. Anything at all!!
We stayed in Ulaanbaatar to witness the grand opening of the country’s largest festival, Naadam, where the three sporting passions of Mongolians, horse racing, wrestling and archery, are played out over a few days!

As memorable as it was riding in,  etched in memories was the media interaction alongside the Ambassador of India to Mongolia, HE Dr T Suresh Babu and Ambassador of Mongolia to India HE Mr. Gonchig Ganbold, within the chambers of the Embassy of India  The Indian Ambassador has been highly instrumental in coordinating this meet purely to showcase the travel of Indians on the Indian made Bajaj Dominar’s to the Mongolian biking fraternity! Invitees included the popular media and television channels, representatives from the Mongolian Choppers who have expressed keen interest in extending the travel beyond boundaries! 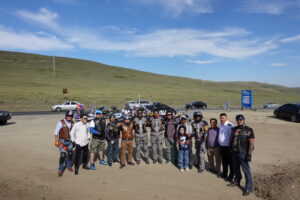 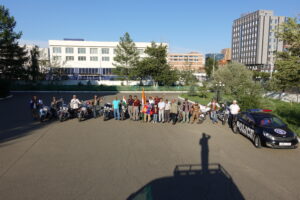 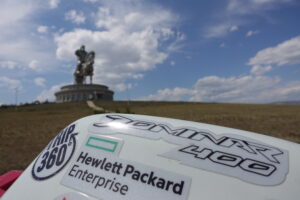 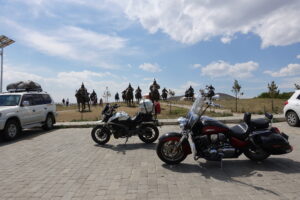 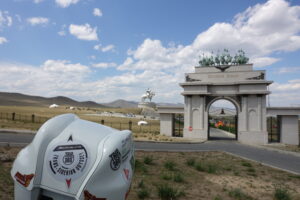 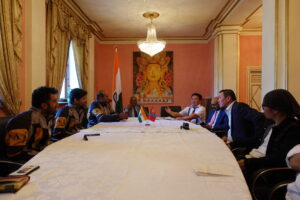 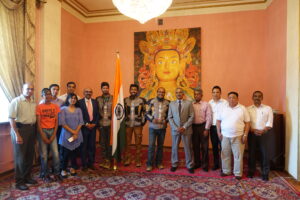 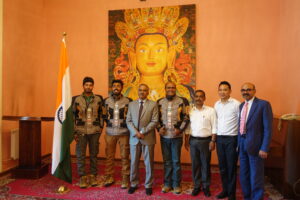 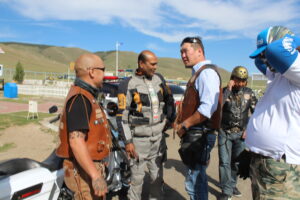 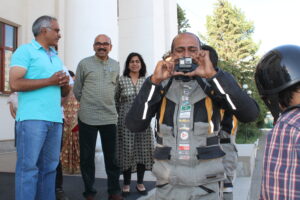 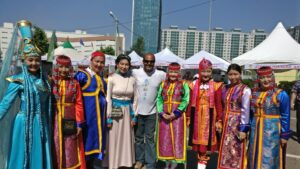 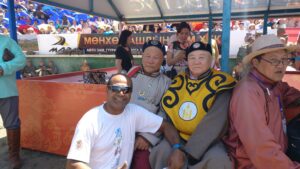 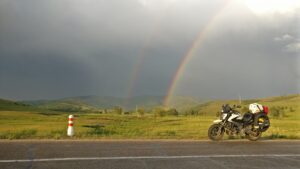