I tried reaching out to quite a few motorcycle companies. But unfortunately, nothing had clicked. That’s when as a last resort, I reached out to Shubhabrata Marmar

who then was with OverDrive and now with PowerDrift.  After listening patiently to what the plan was, he said, if at all, any company in India would look at, it would be Bajaj.

I told him, you know, I’ve done my round the world on my Yezdi and I would like to give it a shot with Bajaj.  And he connected me to Mr. Manish Tandon

who listened to my project patiently and gave me a go-ahead on the 3rd March.  This association with Mr. Tandon would be my launch pad for exciting adventures on their flagship model, the Bajaj Dominar 400!

Armed with Bajaj, I started to connect with my other connects and had Trip360, an adventure vertical of Cox & Kings, Titan Watches, Spartan ProGear, Hewlett Packard, Sahyadri Moto, Woodland Adventure Gear, and my friend Venky Medicharla come on board as our associate sponsors.

Bajaj rolled out the production bikes into the R&D, who thoroughly went over the 3 machines, carefully re-inspecting each of the components that would be fitted on this bike and had them delivered to us.

The prepping of the bike took a couple of days, a small press meet and a flag off from the beautiful Vidhana Soudha in Bangalore, we were riding towards Pune to hand over the bikes to Bajaj who would crate it and send it to our start location, Tashkent in Uzbekistan!! 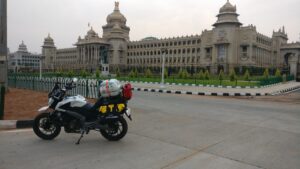