Dominar Trip360 Trans-Siberian Odyssey is possibly a first of its kind adventure for Indians on Indian made motorcycles into territories never tread before. This is a lesser known, seemingly tough, treacherous and one of a kind adventure spanning across six countries and covering over 13,000 kilometers. This adventure would start on the famed Pamir Highway, then wind through some of the most beautiful lakes, zipping through the Charyn Canyon before entering the Mongolia and then into the Siberian wilderness, and would eventually end in Magadan the easternmost point of Siberia, Russia. This route has its own challenges of high altitude passes, to ferry crossings to deserts to mighty river crossings. 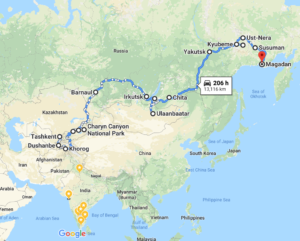 Most of the region in Siberia is on permafrost (Permafrost is any surface that has a temperature of 0 Degrees or lowers for two plus years) that would make the ground very unstable when riding across these regions.

Post the big ride of 1994, The Yezdi Castrol Continental Raid, time was more devoted towards family matters until 2015.  Benelli was just about launching their range of motorcycles, and I took an immediate liking to the 600 I but then when I did get to see the machines, I somehow fell in love with their GT model. There was a cost difference, close to INR 200,000, which my wife realized that I was not able to put together and with no second thoughts, she placed the required amount in front of me from her savings and said, “If not now, when?” 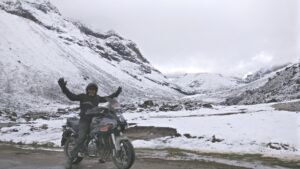 So, that got me back into motorcycling and the urge to travel around the country. I made sure I took her on my rides and have clocked over 50000 kms covering most parts of India, Nepal & Bhutan.

The urge to travel beyond our borders was strong and I had a plan working to ride the St. Petersburg to Vladivostok road.  I was slowly putting together this plan when, in December 2016, Bajaj launched the Dominar 400, and it brought about a wave in the market as a good option for sports touring.

At around the same time, I came across a post on the Motorcycle Travelers Meet (MTM) platform, from Sudhir who was soliciting some information around the same region.  I happened to see it and called on Sudhir to meet up and discuss.  So the discussion started off in January, put together a route in place and this gave us the advantage of thinking in a likeminded fashion.  Sudhir introduced me to Dilip who also had been alongside Sudhir to join the trip. So with these, the team was put together.